George was an integral part of the club and a key member for great many years, giving his time and energy to help promote football and develop the skills of those youngsters for whom he cared so much.

Kirrie Thistle Community Football Club sends its deepest condolences to George's family and to those whose lives he affected so positively.

Pictured below is George receiving a donation from the Police Benevolent Fund from the then Chief Constable for Tayside and George with his under-15 team. 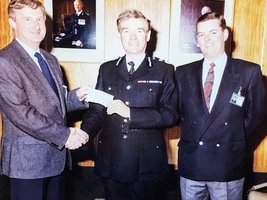 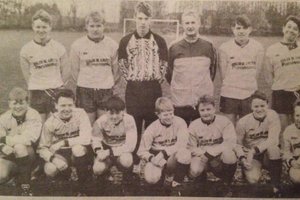 All members are invited to attend the Annual General Meeting to be held online (invitations and links to be sent out prior to the event). 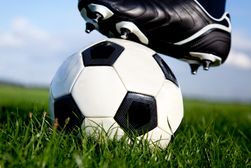 Training on its way back?

With the announcement from the First Minister last week, it looks like we'll be able to get back to training very soon.  However, we cannot become complacent about the continued risks posed by Covid-19 and, as a Club, KTCFC is taking precautions and implementing plans and guidlines to ensure that we comply with regulations and, most importantly, keep our members as safe as we possibly can.

In light of this, we have produced a document (under licence from Neil Antrobus - thank you very much, Neil) which outlines the guidance we will be implementing.  This guidance and a parental/ carer agreement will be availble through My Club Hub for all members.  The agreement is based on an "opt out" process.  Should you not wish for your child(ren) to participate in training just yet, then that's fine but please let us know.  Those of you who do wish for your child(ren) to make a return to training, we will assume that you have read through both the agreement and the guidance and that you have discussed both with your child(ren) prior to them returning to training.  It is imperative that we all work together for this to be a success but it is also imperative that all our members behave in the manner expected by KTCFC.  Any member who does not follow the guidance whilst representing the club will have their parent/ carer contacted to collect them, take them home and remind them of the expectations and guidelines we will be working to prior to any further return.

More information and details will be shared as they become available.

The Club wishes to record its sincere appreciation and gratitude to every doctor, nurse, carer and ALL front-line workers who are risking their own lives to protect us in this time of uncertainty and concern.

It would also pay tribute and thanks to the many members of the Club who have elected to join the established volunteering networks across the town and the county and to those members who are front-line workers.

As a Community Club there will be opportunities for us to use our resources to the benefit of the community once the Covid-19 emergency is over and some degree of normality returns.However, indications are, that in this recovery period and for some time to come, manyneeds (both in the local economy and community) will arise.

In the interim period our position is to continue to follow government guidance and look forwards to resuming playing football but, more importantly, contributing to community support in a positive manner.

Best wishes to all.  Please stay safe and stay at home.

Saturday 1st February saw the first in a program of events designed to provide personal development for the coaching staff at Kirrie Thistle Community Football Club.  The event was run by Kevin Garrick, Head of Children's Academy at Dundee FC Pro Youth Academy and was very well received.

20 of our coaching staff supported by Garry Balfour, Club Development Officer, gave up their time for this, the first in a series of masterclasses designed to provide continuous improvement for the coaching of our players and development for our coach volunteers who give up so much of their free time for the club.

Feedback from all involved was excellent annd the involvement of the volunteer players ensured the session provided just as it had been planned.

KTCFC Plans for 2020 and Beyond 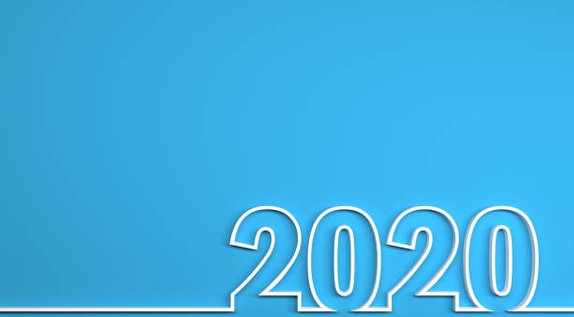 As the Club develops, we felt it important to share our ideas: 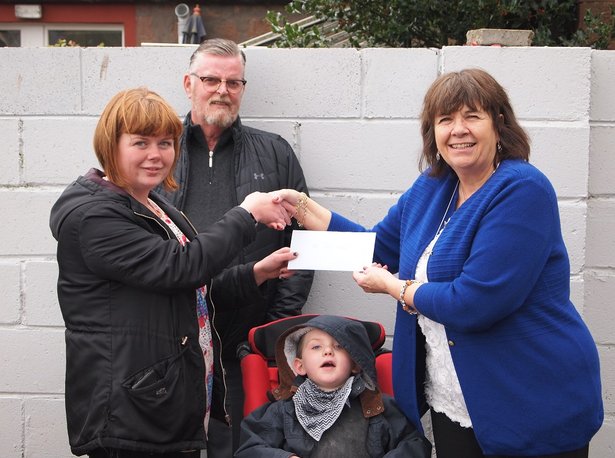 KTCFC Showing Support for Mr Leo and His Family

On Tuesday 8th October, KTCFC Honorary Patron presented a donation to the evergrowing "Mr Leo" fund to show the club's support for the challenges both he and his family support on a daily basis.  Leo was diagnosed with the sadly terminal condition, infantile neuroaxonal dystrophy and is one of only 150 people in the world, having been diagnosed earlier this year.  What started as a way to make memories has become a focus for support for the people of Kirriemuir and its district and Kirrie Thistle Community Football Club is proud to be able to support the family. 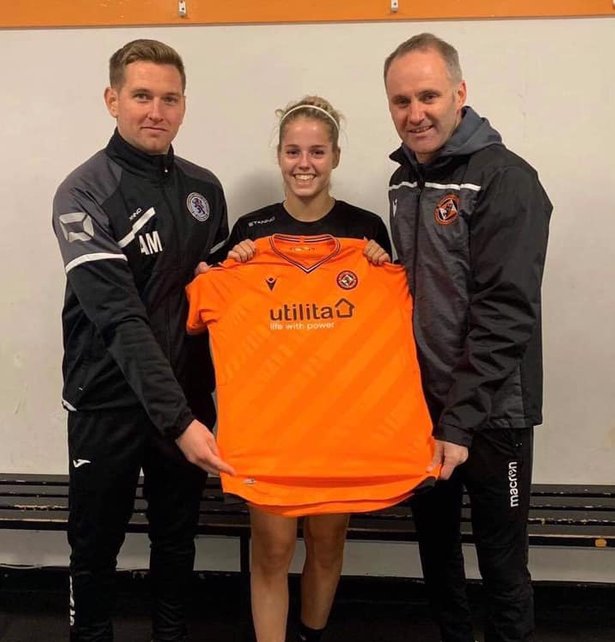 Steffi Simson (SMSC Coach) has had her hard work and talent recognised by Dundee United WFC having been signed to the club this week.  Steffi joined Dryburgh Athletic Girls and Ladies FC as a striker in 2017 and scored 79 goals in 41 competitive games prior to signing for Dundee United WFC and Kirrie Thistle Community Football Club has been fortunate enough to secure Steffi's coaching ability for the Scott McKenna Soccer Centre where she has been outstanding.

We wish you every success for the future, Steffi - congratulations from everyone at KTCFC!

Amanda Kopel, KTCFC's patron, visited the soccer centre this morning (Saturday 21st Spetember) to support the players, families and coaches.  It was an honour to have her with us and to show her the progress of the youngsters and the enjoyment of all at such a young age.

Amanda commented, "I was absolutely delighted to be invited in my role as Honorary President of KTCFC which I am extremely honoured to be, to go along to this morning to watch the youngsters at their training session at the new Scott McKenna Soccer School, at Southmuir PS, Kirriemuir.

There are definitely a few budding football stars of the future among them, even at this early age.

Well done to Garry and his coaching team for making the session so enjoyable for the children.

It was great to see them learning how to interact as a team, all while enjoying themselves, with great fun warm up sessions.

It was great also to meet some of the mums, dads, grandparents and family members who brought the young ones along.

Thank you to everyone for making me so welcome......and a big thank you to the most important people there this morning.....our young footballing stars of the future." 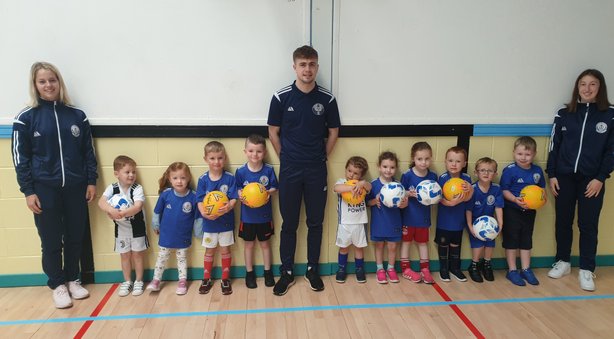 Scott McKenna Soccer Centre Kicks Off to a Great Start!

Having found that there was significant interest from local parents, KTCFC have launched the Scott McKenna Soccer School which is seen as an innovative approach, giving our newest and youngest Club members an opportunity to “have fun with a football.”

This is our latest initiative in Club development and is aimed the 3 to 5 years age groups of both boys and girls.

The project is managed by our recently appointed Club Development Officer, Garry Balfour, assisted by three new young helpers - namely Steffi Simpson, Abbie Milne and Ryan Cormack whom we are delighted to welcome on board.

Last Saturday saw 15 of our latest recruits attend with their parents at the first session held at Southmuir Primary School at 10am.

All of the youngsters really enjoyed the experience kitted out in their Scott McKenna Soccer School t-shirts. This project is simply aimed at allowing them to have fun with a football in company and provide a pathway for them to play football at the next stage.

We are very grateful to Scott McKenna for endorsing this project and hope that sometime in the near future that he may be able attend and meet the group.

Should any other parents / children wish to participate please contact Garry Balfour via email - cdo@kirriethistlecfc.co.uk 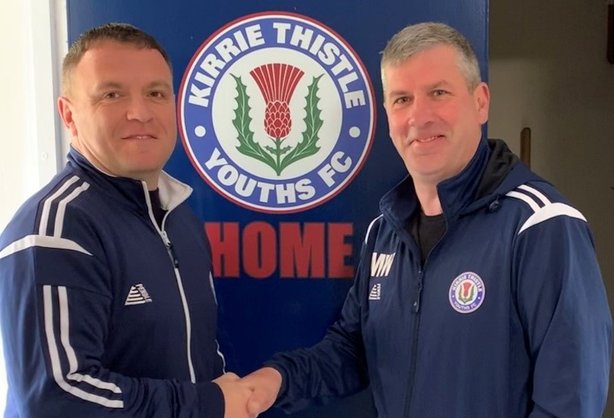 Following the redirection of the community sports club to concentrate its initial efforts solely on the development of football within the Kirriemuir and Dean area, Kirrie Thistle Community Football Club is proud to announce that Garry Balfour, an experienced and successful football coach, has joined the club as Club Development Officer. Garry’s primary role is to build upon the successes that KTCFC has already experienced and to develop new opportunities for access to football for all whilst increasing membership and further growing the success of the club.

Alan Davie, KTCFC Chair, is excited by the appointment and said, “I am extremely happy to be able to welcome Garry to the club in this, the first professional appointment to KTCFC. The experience and enthusiasm he brings to the club will give us all opportunities to help the club grow and build on the successful grassroots system we have in place.”

Garry has been busy since his appointment on the 1st June and has already secured further partnerships for the club by bringing some independent football teams in the area into the community football club fold. He is also championing the Scott McKenna Soccer School, further news of which will be posted through the club website – www.kirriethistlecfc.co.uk and via social media through Facebook and Twitter.

“I am very excited to be given the opportunity to help drive the club forward and create the building blocks for the future. The club is very forward thinking and already has a solid structure in place. My initial priority is to introduce and establish the Scott McKenna Soccer School which I hope to have up and running at the end of August. I am looking forward to working with the Kirriemuir community and surrounding areas to bring a football for all club. 1Community1Club.” (Garry Balfour, CDO.)

Pictured above is Mike Watt (Trustee) welcoming Garry (left) to the club.

In partnership and with the support of Scott McKenna, Kirrie Thistle Community Football Club is proud to announce that the "Scott McKenna Soccer Centre" will be open to all youngsters aged 3 to 5 years.

The soccer centre will be held at Southmuir Primary School in Kirriemuir with the first of many  sessions beginning at 10am on 31st August.

For more information or to reserve a place, please contact Garry Balfour (Club Development Officer) either via email (cdo@kirriethistlecfc.co.uk) or by phone (07754 495007).

Kirriemuir's Walking Football Club meets at Webster's High School Astroturf on a Monday evening from 7pm until 8pm and is keen to recruit new members to the team.

If you are looking to continue your footballing career at a (slightly) more sedate pace, then contact Alan Edwards on 07834 601291 for further information.

"Walking football is exactly what it sounds like - a standard game of football where players walk instead of run.  It is fun, friendly and can help you feel fitter and healthier."